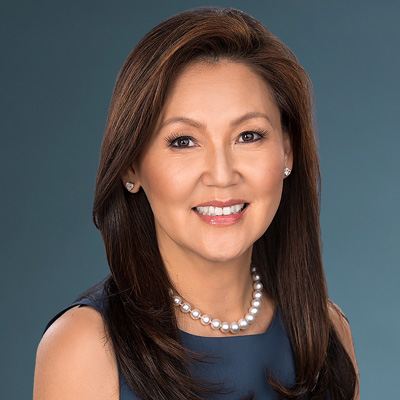 Jihee Huh is the Vice Chair of PAFCO and Co-Founder of Pete’s Seafood where she oversees company marketing, strategic planning and new business development. PAFCO was selected as one of the 2019 most influential family businesses in Los Angeles.

Jihee serves as the Asian Pacific Islander Public Affairs Commissioner for State of California. Jihee is also an Active Life Trustee for public radio station SCPR. Jihee has served as Chair of the Board of SCPR. At Children’s Hospital of Los Angeles’ board, Jihee has served as past Vice-Chair of the Saban Research Institute. Jihee is on the NPR Foundation Board of Trustees as well as the director of The California Club.

In 2018, she joined the Executive Committee member for Human Rights Watch of Los Angeles. Jihee and her husband Peter are on the US Olympic Foundation Board. Jihee recently joined the California Community Foundation Board of Trustees. She is an Executive member of Women Leadership Vital Voices. She is an active participant of the national organization The Council of Korean Americans. She has co-founded the Los Angeles Coalition Foundation Embrace Unity, which is a non-profit organization 501C3 – supporting underserved scholars for diverse communities to learn about civic engagement and empowerment.

Educated in New York City, Jihee earned a bachelor’s degree from St. John’s University. In 2012, she completed the Certificate Program at the Executive Harvard University for “Excellence in Not for Profit Governance.”

Jihee was recognized in 2007 by the US Congress for her work and support on the successful passage of House Resolution 121.

Her husband Peter serves on the AAAJ, Asian Americans Advancing Justice Board; The Chadwick Song Do – International School Board, in Seoul, Korea; and the Council of Korean Americans Board of Trustees.