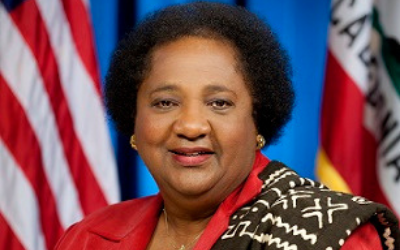 California Commission on the Status of Women and Girls Congratulates Commissioner and Assemblymember Dr. Shirley Weber On Her Nomination as Secretary of State

SACRAMENTO, CA – The California Commission on the Status of Women and Girls (CCSWG) exuberantly celebrates Governor Newsom’s nomination of Commissioner Dr. Shirley N. Weber to the position of Secretary of State. Dr. Weber is an incredible California leader and an amazing champion for women.

Commission Chair, Dr. Wilkins responded to this historic nomination saying, “While we as a Commission continue to advocate to advance the causes of racial and gender equity in California and across the nation, and to support the advancement of women at every level, we are honored and excited to see one of our own breaking barriers at the highest levels of government.” Executive Director of the Commission, LaKenya Jordan said, “Dr. Weber is both an inspiration and an icon. Her years of dedicated service to women and girls, and advancing equity and justice are well known. She is held in the highest regard and will serve the citizens of California well.” The Commission hopes that little girls across the state and across the nation take note as women like Dr. Weber lead the way into a new future full of opportunity for all.

The California Commission on the Status of Women and Girls is comprised of 17 appointed Commissioners who work tirelessly to advance greater equality for women and girls inclusive of race and gender, through legislative advocacy and programs and partnerships focused on advancing women’s equality, pay equity, women’s wellbeing, workplace rights, positive images of women and girls in the media, and increasing the number of girls engaged in Science, Technology, Engineering, Arts, and Math (S.T.E.A.M.).

The Commission on the Status of Women and Girls works in a culturally inclusive manner to promote equality and justice for all women and girls by advocating on their behalf with the Governor, the Legislature and other public policymakers, and by educating the public in the areas of economic equity including educational equity, access to health care including reproductive choice, violence against women and other key issue areas identified by the Commission as significantly affecting women and girls. To learn more, please visit: www.women.ca.gov