The California Commission on the Status of Women and Girls voted unanimously to support ACA 5, which creates equal opportunities for all Californians. Upon passage through the legislature ACA 5 became Proposition 16, which heads to the voters on the November 2020 ballot.

Proposition 16 allows a measure to be put on the November 2020 ballot to remove an outdated law (Proposition 209) to prevent continued discrimination against women and people of color by allowing gender, racial and ethnic diversity to be considered as one of many factors in public employment, public contracting and public education. 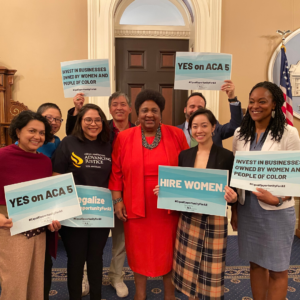 The quantitative data reveal that race and gender-conscious policies that were previously implemented to remedy discrimination and hostility against women in the transportation construction industry before 1996 were successful in increasing participation among women-owned firms. However, the culture of the transportation construction industry appears to challenge, at every step, the inclusion of women. These trends are more pronounced for women of color, particularly African American-owned women-business enterprises. Proposition 209 was put on the ballet in 1996 and titled the California Civil Rights Initiative, when in fact it ended most programs designed to open the doors of equal opportunity for women and people of color in public  contracting. (https://www.law.berkeley.edu/files/thcsj/A_Vision_Fulfilled_Sept_2007.pdf)

Before proposition 209, 2,096 transportation construction businesses were owned by women. Today, only 763 of those businesses are still in operation, 79 percent of which are owned by white women. Women of color owned women-business enterprises (WBEs) experienced many more difficulties post-Proposition 209 than white-owned WBEs. After the passage of Proposition 209 in 1996, real dollars awarded to certified WBEs fell by 40 percent. The number and percentage of awards to women decreased after the passage of Proposition 209 and the climate of the industry became increasingly hostile to women—reflecting an entrenched social bias. 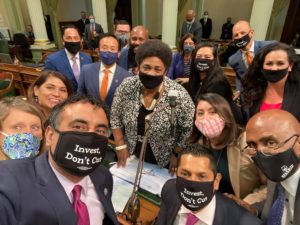 Nearly twenty-five years later, Proposition 209 has hurt, and not helped, Californians by prohibiting time-tested affirmative action programs that bolster education and job opportunities for women and people from Black and Brown communities. African American and Latino students admitted to the University of California decreased between 12 and 60 percent depending on the campus. A striking shortage of physicians of color has been exacerbated since the ban on equal opportunity programs in state-run medical schools.

Divisions are driven by inequality. The coronavirus crisis has made clear that we need to address this law that perpetuates inequality now.